Every game includes a credits sequence accessible from the options menu. In most cases, these credits sequences not only list off the people who worked on the game, but also include an animation to accompany it. These animations all have the same style and many appear across multiple games in the series, and they are related to the current list of people displayed. They also all use a jazz score for the background music composed by Joey Edelman, and this in turn was usually included in its entirety as a bonus CD audio track. Four games in the series have a unique set of credits (more on that below). The credits sequences are listed in order of which they first debuted.

A wizard attempts to create a dog out of nothing, but at first struggles making anything at all, then makes a rat but is dissatisfied, then morphs it to a chicken. Still frustrated, he tries one more time, and is successful at making a dog. However, as he is giving an aside for his accomplishment, the dog morphs into a large dragon unbeknownst to him. The dragon pulls the wizard's sleeve to get his attention, which completely scares the wizard and leads to him fainting. The dragon simply gives an aside glance, chuckling.

This credit sequence has no real consistency on who it includes; depending on which game it appears in, it may include either the production staff, artistic direction, programming team, music, sound engineers, and/or voice actors. Because of this, it is considered to be a "wild credits sequence".

A pianist, a trombone player, and a double bass player all prepare to play the jazz score that accompanies the credits, with a one-man-band on the far right occasionally interrupting with cartoonish noises. The one-man-band is equipped with a whole slew of instruments, such as a saxophone, a bass drum, a bike horn, a cow bell, and even a green bird. After multiple interruptions occur, he finishes off by shooting a pop-gun. This is followed by glass breaking in the distance, shocking the other musicians.

This sequence is almost always accompanied by the sound team, including music, sound engineers, and voice actors. It has by far the most appearances across the Living Books games.

NOTE: Games that this animation was not originally included on are marked with an asterisk (*).

A male and female artist are painting a red triangle and a green circle, respectively. The male painter mistakenly flings some of his to the female painter, which the female painter strikes back in retaliation by intentionally flinging her red paint back onto his green paint. This fight goes on for some time, until it eventually ends with them splashing their paint buckets on each other's canvases. However, their red triangle and green circle both shows up again afterwards, with each taking notice. They are both pleased by this, and shake hands.

This is almost always used when the artistic team is being listed off.

NOTE: Games that this animation wasn’t originally included on are marked with an asterisk (*).

A programmer sits in front of his computer, starting to type away. A bunch of nonsense code starts to appear above, but he takes it too far away and the cords turn burning red, causing the computer to overheat, overload, and eventually explode and fall apart (in a cartoonish fashion). In the aftermath, a cube lands on the programmer's head, then he is exasperated as the computer's screen starts blinking red within its electrical buzzing noises. (In Arthur's Teacher Trouble, there is a slightly longer ending where the programmer glances at the player and chuckles "b-huh" in a sad tone.)

This scene is typically accompanied with the programming team.

NOTE: Games that this animation wasn’t originally included on are marked with an asterisk (*). Games in which this animation lacks the ceiling crash sound effect are marked with a flag (⚑). The ceiling crash sound effect from The New Kid on the Block, Harry and the Haunted House, and Dr. Seuss' ABC aren’t used after the programmer’s computer explodes.

A worker is taking in calls from two phones at the same time, all while a group of people open the door to his left and start tossing him all sorts of shapes, all while he begins to juggle them. After the group of people leave, the worker tosses his shapes up into the air, and starts catching all of the falling shapes and stacking them up onto his finger. After that, the worker gives an aside glance and waves his arm out, with one phone hanging on his arm and ringing.

A director with recording equipment for a voiceover session holds a microphone up to a lady, who then screams very loud and blows the director's headphones away, making the volume meter on the recording machine break the volume scale with bursting sound waves. The headphones fling back onto the director's head in boomerang motion, who then then decides to do a sound test on a kitty cat who is sleeping. The lady then steps on the cat's tail, making the cat screech and run off the screen, hence the volume meter on the recording machine reaching the perfect volume that doesn't break the volume limit. The director then makes an "okay" sign with his finger to show approval to the lady. He then gives an aside glance and raises his eyebrows.

Like the Music credits animation, this one was only involved with the sound team, including music, sound engineers, and voice actors.

NOTE: This credits animation is extremely scarce to come across as it only appears in the credits on the Phillips CD-i version of Little Monster at School, and never made it into any of the Windows/Macintosh computer versions of any Living Books game. It was exclusively made in 320x200 resolution unlike other credits sequences, and this one has been long forgotten until it was recovered by a YouTuber, GeorgeQGreg, and subsequently uploaded by ARemoteAndRandomName (video provided below).

Seven people stand in a line facing the screen, all cheering. At the end of the animation, within a few seconds, the blonde woman on the far left accidentally lets go of a balloon and it pops, startling everyone.

This is used to show the remaining members not already covered in other sections, like quality assurance and special thanks. This animation is always positioned after the Music animation when it doesn't have enough vacancy to make room for said crediting lists.

Four games in the series do not follow the traditional credits, instead adopting a custom one.

Original Variant of the Credits Theme[]

This variant was only used in Just Grandma and Me and Arthur's Teacher Trouble. The Wizard's background music had the main piano track at a lower volume and different quality to the piano instruments, the Music animation performs the same tune as the Programmer one but with the trombone, the music in the Painting animation remained identical but only with different quality to the instruments (except the clarinet remained the same), and the Programmer animation featured the entire uncut song without getting the ending piece cut off in the middle (despite the first half of the first piece being cut like how the Music animation always plays out). 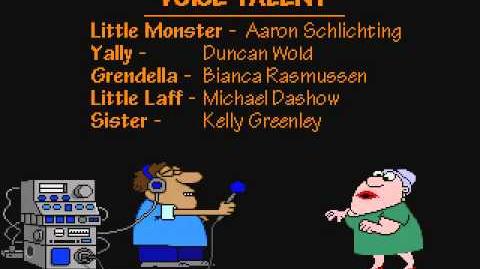 A Rare Credits Sequence
The rare Voiceover credits sequence from the CD-i port of Little Monster at School, found by GeorgeQGreg