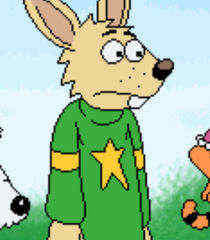 Earl Earwax is one of Harry's friends in Harry and the Haunted House PC game along with Stinky Jones, Amy and Harry. He gets very scared and accuses Harry of losing the baseball. Unlike Amy Fourpaws (who is not scared of anything), he is also scared of the dark, ghosts and monsters, espeically when he imagines himself getting caught by a werewolf.

Earl is a light yellow jackrabbit with buck teeth whose only attire is a green oversized long-sleeved turtleneck with a yellow star on the front and a yellow stripe on both upper sleeves, which extends down to his shins and allows his tail to pop through the rear end of it. He is the only one of the four kids not to wear pants. He is the tallest, oldest and coward of the group. 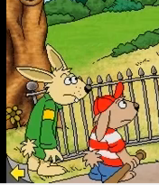