Harry and the Haunted House

Harry and the Haunted House is the eighth Living Books game from 1994, and is based on the 1987 book of the same name written by Mark Schlichting and presented by Harry D. Rabbit. It is the third (second if you don't count Mark Schlichting's version of The Tortoise and the Hare) and final title in the series to be an original story exclusively created by Living Books– rather than an old one adapted from years later. Unlike Ruff's Bone (which was co-produced by Colossal Pictures) and The Tortoise and the Hare (which was a retelling of this fable), this one was entirely produced by Living Books themselves. Released on October 24, 1994.

Harry is playing baseball in a field with his friends Amy Fourpaws, Earl Earwax, and Stinky Jones, along with his dog Spot just after lunch-time. Earl throws a curved ball, and Harry hits it way out into an old mansion in the background. Earl remarks that Harry just made a big blunder, stating that the house is haunted. The boys argue about how they're going to retrieve the ball, and are all reluctant to do it, but decide to go on anyway causing Amy to say that they’ll all go get the ball together. When they make it into the house, they're continually scared by noises and creepy sights, but all of them are only their imaginations (according to Amy), as it usually turns out to be one of them. For example, the boys are scared by a scratching noise, but according to Amy, it was only Spot itching and she tells Harry that his dog has fleas. At one point, they hear a stomping noise, in which they all begin to panic (especially Earl), but it was only their lost baseball, and they all make it out of the house, laughing at how the things that frightened them were only themselves and their imaginations. At the end, they discover that Harry lost his hat somewhere in the house, and are once again reluctant to go back inside before dinner. In the "THE END" screen, Harry got his hat back and sweats, then he signs off by saying, "Phew. Were you scared? I wasn't too much. Well, I'll see you again soon. Bye!"

Stinky: D-d-did you see that?

Sailor in the painting: How about a kiss from the old captain? 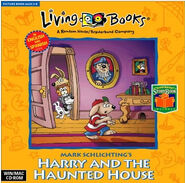 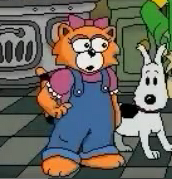 Harry D Rabbit: Are you sure you want to quit?

[clicking on "No" which a sailor in the painting is holding]: Okay.

[clicking on "Yes" which an old cat lady and her cat in the painting are holding]: Okay. Bye!